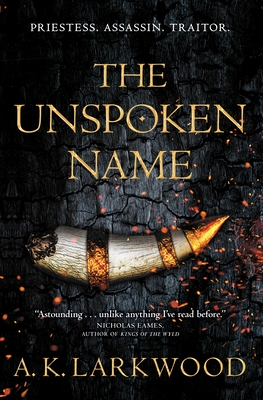 The Unspoken Name by A.K. Larkwood

Synopsis: What if you knew how and when you will die?

Csorwe does — she will climb the mountain, enter the Shrine of the Unspoken, and gain the most honored title: sacrifice.

But on the day of her foretold death, a powerful mage offers her a new fate. Leave with him, and live. Turn away from her destiny and her god to become a thief, a spy, an assassin—the wizard’s loyal sword. Topple an empire, and help him reclaim his seat of power.

But Csorwe will soon learn – gods remember, and if you live long enough, all debts come due.

Review: I must say it has been a long time since I was as disappointed in a book as I am in this one. My expectations for this book were sky high. I had seen a lot of good buzz about it and the premise sounded amazing. A high fantasy with orcs and elves, mages and assassins? And brought to me by Tor Books? Sign me up! Here just have my money!! Then, in the end, it was just a giant feeling of “whomp whomp”. That makes me sad. Especially because this book had a ton of potential.

Csorwe had the potential to be an amazing character. She was raised her entire life to know that she will be sacrificed to her god on a specific day and that is her only purpose. And then, at the last moment, she is offered an alternate destiny. A chance to become an assassin, a sword hand for a wronged wizard who wants his power back. And she just so happens to be an orc priestess too. Unfortunately, she was also incredibly boring. I had no emotional connection to her at all. Probably because we only see her in action packed moments. We only see her in the moments preceding battle, the midst of battle and the immediate aftermath of battle. Characters are created in the little moments. The moments that the character spends training, planning, preparing, and theorizing about what is to come. There was absolutely none of that in this book. We go from Csorwe leaving behind her destiny to several years later when she’s already largely trained. We are told that she really enjoyed training with a mercenary group, but we never actually see that happen. We are told that she is a remarkable fighter and assassin. Except she only does this actual task one or two times, neither of which could be considered wildly successful. Mostly she gets her ass kicked. To the brink of death. Seemingly every day.

Tal’s character was slightly more fleshed out but I got the feeling that he was there purely as an adversary for Csorwe and occasional comic relief. That was a shame because I felt like there was untapped potential there. Shuthmili was a good character and I found myself connecting with her at times, but since she isn’t a major factor in a lot of the book it was hard to develop any lasting feelings about her.  And her romance with Csorwe was very sweet.

The most memorable character was Oranna. I had some deep feelings about her and thought she was the best character as a whole. She actually felt like a real person instead of a cardboard stand-in for a real person. She was wonderful although I don’t think that I ever completely grasped her motivation behind everything that she did. I know what she told us her motivation was but it seemed hollow and shallow. I suspect it wasn’t entirely the truth.

The writing was technically solid and I found myself reading large swathes of pages at a time without realizing the time was going by. That was the good part. The problem was the disjointed nature of the narrative. We start with Csorwe at 14, then we jumped a few years to about 17 or 18, then jump again to her at around 22. Every time we arrive in a new time period, things are already figured out and a plan is already well underway for what needs to happen. It was confusing. I never got a chance to get invested in a particular narrative before it was over and we moved on to the next thing. There was also absolutely no showing in this book, just telling. We are told that people felt a certain way. We are told that things work a certain way. We are told that this is the answer to the entire thing. We are told that this is what will happen next. It made things very boring and without a connection to the story.

I am not sure why the author tried to make different races of beings. I forgot that Csorwe was an orc for most of the book because it is never mentioned and it doesn’t influence how she behaves, speaks or her interactions with others. Similarly, I completely forgot that Tal was an elf until I was writing this review and remembered some tidbit about his ears and skin color. I don’t need Tolkien levels of race building here. Frankly I am glad it wasn’t because Tolkien’s 4 page narratives about a tree bore the bejesus out of me (I know, I pronounced myself a heretic on that one, haha!). But you need to give me something because these characters were painfully human.

Because of all this showing and not telling, I also have no idea how this world looks or how it works. I got some vague stuff about gates that remind me of Stargate and some kind of ship. It is alternately described as a wooden ship or a barge, and has an “alchemical engine” which gives me steampunk airship vibes. But I have no idea if any of these interpretations are correct. The world itself was not fleshed out well. So as interesting as a Maze that eats dead worlds is, unless you can describe it for me then it’s just an interesting idea and nothing else.

One aspect that I loved was the pantheon of gods, how they are worshipped and the magic system of this world. That was all completely stellar. I am always on board with some good ole fashioned god worship, complete with sacrifices. I also really enjoyed the rules for using magic in this world. Magic comes with a price, exacting a physical toll on the user. So there is a delicate balance that must be struck and maintained. That was all fabulous and one of the big things that kept me going on this book.

My final issue is that I have no idea why this book was called The Unspoken Name. We have the Unspoken One, Csorwe’s patron god. But they are only referred to as the Unspoken One. Never as anything else. The term unspoken name weren’t actually in the book until page 435 and it seemed to be mostly used as an exasperated expletive. “We need to think. We need to – Oh, by the twelve hundred Unspeakable names, what in hell is that?” This probably shouldn’t get on my nerves but it did.

In the end, this book was okay. It shows some signs of brilliance and I can see that the author is very talented. But that brilliance was not curated properly and so the final result ends up being messy and disappointing.