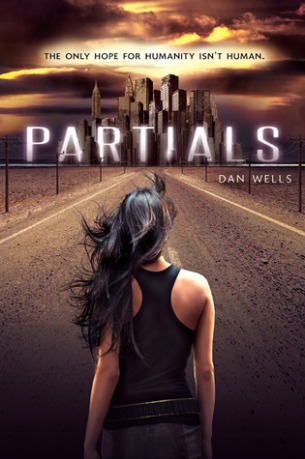 Published by HarperCollins Publishing on 2/28/12

The human race is all but extinct after a war with Partials—engineered organic beings identical to humans—has decimated the population. Reduced to only tens of thousands by RM, a weaponized virus to which only a fraction of humanity is immune, the survivors in North America have huddled together on Long Island while the Partials have mysteriously retreated. The threat of the Partials is still imminent, but, worse, no baby has been born immune to RM in more than a decade. Our time is running out.

Kira, a sixteen-year-old medic-in-training, is on the front lines of this battle, seeing RM ravage the community while mandatory pregnancy laws have pushed what’s left of humanity to the brink of civil war, and she’s not content to stand by and watch. But as she makes a desperate decision to save the last of her race, she will find that the survival of humans and Partials alike rests in her attempts to uncover the connections between them—connections that humanity has forgotten, or perhaps never even knew were there.

Once again, let me warn you this review may contain spoilers, pretty much everything I post probably will!  I was really excited about this book.  I saw it on the shelf at the bookstore and I thought it looked interesting and then when I picked it up and read the quote on the back I was sold.  I took the book home that day and eagerly waited for the right moment for me to read it.  Overall, I will give this book a solid 3 stars, maybe closer to 3 and a half (out of 5).  I enjoyed it even though I felt that some of the plot was very flawed.

The main problem with this book was the predictability of it.  Pretty much everything I thought would happen, happened.  No matter how passing the thought might have been, it came true.  I really doubt that I’m that good of a guesser!  Just being a writer doesn’t mean I know secret plot formulas for books and movies, I can be surprised just like anyone else.  For example,the author makes it a point to tell you that Kira is different from everyone else around her.  My first thought was, well maybe she’s a Partial.  I was correct and I didn’t want to be correct since it seemed like a cliche.  Another terrible cliche in this book was the old “the government is the real bad guy”.  I spent most of the book praying that wasn’t the case.  I have read that plot a million times and I didn’t want this to be one of those books.  To a certain extent I was correct on that aspect as well, though not in the way I expected.

However, even though I felt the plot had many flaws and holes, there were some moments of brilliance that I just loved.  The world building in this book is above reproach. You can see everything that is being described to you and you can feel what the characters must be thinking and feeling.  It takes a talented writer to achieve that without falling into the trap of just telling you what’s going on rather than showing you.  The characters were equally well constructed and I emotionally connected to all of them by the end.  Kira was the most likable character and that was a good thing since she’s the main narrator.  But I also found myself liking characters who weren’t quite a likable like Marcus or Jayden.  They were a bit more objectionable and had more annoying qualities but I still liked them.  Samm presented an interesting dilemma as a character because you are not supposed to like or trust him, but you can’t help it.  And that lulls you into trusting him, even when you know you shouldn’t, and then a potential betrayal from him is all the more emotionally jarring.

The ending of this book was what clinched it for me however.  Up until that last chapter or two I was not liking the book nearly as much as I expected.  But that last 30 pages was spectacular!  I never suspected it was going that way and I felt caught off guard by the last sentence.  It was a great way to end the book and made me ravenous for the sequel just to get some answers for the questions that were raised.  Unfortunately I will have to wait for February 2013, the expected publication date of Fragments.  I will also have to read Isolation, a short story, available as an ebook only, about the events which led to the Partials War and the release of the RM virus.