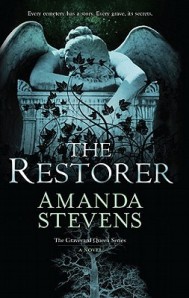 The Restorer by Amanda Stevens

My name is Amelia Gray. I’m a cemetery restorer who sees ghosts. In order to protect myself from the parasitic nature of the dead, I’ve always held fast to the rules passed down from my father. But now a haunted police detective has entered my world and everything is changing, including the rules that have always kept me safe.
It started with the discovery of a young woman’s brutalized body in an old Charleston graveyard I’ve been hired to restore. The clues to the killer–and to his other victims–lie in the headstone symbolism that only I can interpret. Devlin needs my help, but his ghosts shadow his every move, feeding off his warmth, sustaining their presence with his energy. To warn him would be to invite them into my life. I’ve vowed to keep my distance, but the pull of his magnetism grows ever stronger even as the symbols lead me closer to the killer and to the gossamer veil that separates this world from the next.

Every time I pick up a book lately my only thought is “Please God don’t let this suck!  All I seem to do is leave bad reviews!”  I had such high hopes that this might be the one to break the streak.  First, it has an orgasm worthy cover.  I could stare at this cover for hours and not even blink once, it’s just that gorgeous.  The synopsis just about made me faint in ecstasy.  It sounds EXACTLY up my alley!  This book excited me, it intrigued me, and ultimately it disappointed me.

My biggest sticking point with this book was that Amelia is SO DAMN BORING!  You can’t even call her a Mary Sue because she manages to screw up everything she does and doesn’t have anyone falling at her feet and begging her to be theirs.  Amelia is supposed to ignore the ghosts…why?  Well we get a vague answer about haunted people being drained of life force but honestly it’s never entirely explained how people become haunted because most haunted people can’t even see the ghosts.  So, *headscratch* try and figure that one out!  Then Amelia has the most boring job on the face of the earth.  She spends hours cleaning tombstones with brushes and doing….other restoration thingys that never get explained.  As if this wasn’t boring enough, she is asked to assist on a murder investigation and then does NOTHING.  No, I literally meant nothing.  She stands around and eavesdrops on other people and then asks a few stupid questions and then stands around some more.  Then, for the cherry on top, let’s throw in her obsession with Devlin.  It’s actually really creepy.  She turns into a complete stalker.  She tracks down information about his dead wife and child behind his back for fuck’s sake!!  I just can’t even begin to describe how much of a line crossing that was.

The murder mystery of this book couldn’t even hope to overcome how boring everything else was.  Frankly, I don’t even remember how it got resolved because I was very nearly in a coma by then.  I couldn’t even get enough passion about this to one star it and tear it apart.  I give it two stars because the cover still rocks, the rest is useless.  If you need a cure for insomnia, give it a shot!