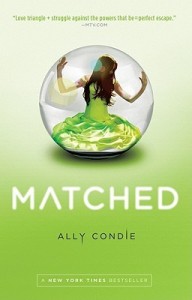 Synopsis and photo from the Goodreads book page

Buy this book at: Amazon / B&N

Cassia has always trusted the Society to make the right choices for her: what to read, what to watch, what to believe. So when Xander’s face appears on-screen at her Matching ceremony, Cassia knows he is her ideal mate . . . until she sees Ky Markham’s face flash for an instant before the screen fades to black. The Society tells her it’s a glitch, a rare malfunction, and that she should focus on the happy life she’s destined to lead with Xander. But Cassia can’t stop thinking about Ky, and as they slowly fall in love, Cassia begins to doubt the Society’s infallibility and is faced with an impossible choice: between Xander and Ky, between the only life she’s known and a path that no one else has dared to follow.

Review:  First off I want to clarify something that has been bothering me, this should not be classified as a dystopian novel.  Dystopian novels are a genre defined by extreme poverty, oppressive governments, and just general ruin and depression for everyone in society.  That is not the case with Matched.  Yes there is an oppressive government but everyone is happy, everyone has a job, everyone has the same home and their every need met.  This is a utopian novel, not a dystopian novel.  Utopian novels are ones where everyone in the society is taken care of and basically happy, but there is almost always an undercurrent of something darker going on.  Okay, I got that out and I feel better now.

This was a book that I can’t really say I hated or liked, I was very ambivalent to it because I didn’t connect to the story or characters at all.  I found Cassia annoying and shallow and the world building was infuriating.  But let’s start with one thing at a time shall we?

I mentioned that I had a problem with the world building.  Here is that problem.  The author dumps us into this world but doesn’t bother to explain anything that’s going on.  You’re not allowed to share food, except for certain circumstances, but it’s not explained why that’s against the rules.  Cassia spends her days “sorting” in preparation for getting a job, but it’s not really explained just what exactly she’s doing with the sorting or why it’s important.  It’s not until the end when this is applied practically then you can understand but until then it was just looking at information for patterns and similarities.  Everyone dies on their 80th birthday, why that day?  Why that year?  None of those things are ever explained.  As a reader, I don’t want to just accept everything about your new world, I want you to explain that world to me or I just can’t have that much emotion about it.

Cassia was annoying and I spent most of the novel just wanting to strangle her.  She loves her life in this world.  Everything is provided for her, she has a schedule, she has a future and she doesn’t have to think for herself at all!  Then she gets her Match and it’s Xander, also perfect, but wait there’s Ky’s face there too.  Somehow, in that moment, she becomes obsessed with Ky and completely forgets that Xander exists.  She only remembers that Xander exists when she needs his help for something that could get him in trouble.  She spends the rest of her time fawning over Ky and making asinine comments about his deep, mysterious, color changing eyes.  She had barely even noticed his presence prior to that but somehow she’s decided oh I’m falling in love with him!  And because he questions Society’s rules, so does she.  Because he subverts Society’s rules, so does she.  This girl didn’t have an original thought cross her brain in the entire book.

There were a thousands fragments of a plot that never quite became a whole plot, combined with an irritating heroine who drools over someone and ignoring her Match and her “best friend”.  And then in the end she complains about how confused she is because she loves both of them.  No you don’t you self centered little twit!  You love that you can use Xander because he’s so damned loyal to you.  And you love fawning over Ky because he’s the forbidden fruit.  None of that is love girlie!  And could she be any more of an idiot about Ky?  She KNOWS they are watching her, she KNOWS they set up a circumstance for her to favor him unfairly and what does she do?  Favors him unfairly, knowing it will put him in danger!  Stop drooling over his eyes, grow a brain, and think about someone else’s welfare for once.  The author tries at the end to pull all these plot fragments together with the tried and true….it was all a conspiracy…line.  But it didn’t work for this book and just made me laugh at the absurdity of it.  I didn’t like this book, I didn’t like the plot or the characters.  At least I can say it wasn’t as awful as some other books I’ve read.

3 thoughts on “Matched by Ally Condie”