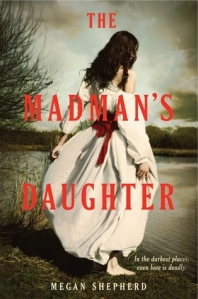 The Madman’s Daughter by Megan Sheperd

Buy this book at (no seriously you need to buy it!): Books A Million / Book Depository / Amazon / B&N

In the darkest places, even love is deadly.

Sixteen-year-old Juliet Moreau has built a life for herself in London—working as a maid, attending church on Sundays, and trying not to think about the scandal that ruined her life. After all, no one ever proved the rumors about her father’s gruesome experiments. But when she learns he is alive and continuing his work on a remote tropical island, she is determined to find out if the accusations are true.

Accompanied by her father’s handsome young assistant, Montgomery, and an enigmatic castaway, Edward—both of whom she is deeply drawn to—Juliet travels to the island, only to discover the depths of her father’s madness: He has experimented on animals so that they resemble, speak, and behave as humans. And worse, one of the creatures has turned violent and is killing the island’s inhabitants. Torn between horror and scientific curiosity, Juliet knows she must end her father’s dangerous experiments and escape her jungle prison before it’s too late. Yet as the island falls into chaos, she discovers the extent of her father’s genius—and madness—in her own blood.

Inspired by H. G. Wells’s classic The Island of Dr. Moreau, The Madman’s Daughter is a dark and breathless Gothic thriller about the secrets we’ll do anything to know and the truths we’ll go to any lengths to protect.

This book is awesome with a side order of fantastic.  I have not read the book that inspired this novel, although I know the premise and basic plot points.  I expected that to mean that I didn’t anticipate any of the plot twists, that was not exactly accurate but I still loved the book.  It was creepy without being even the slightest bit gory…okay maybe there was one tiny gory moment but not too bad.  It made my skin crawl without being traditionally scary.

Juliet is a character that I had to like.  She is tough, feminine, smart, articulate, creative, and curious.  Its been quite a long time since I read a book with such a kick ass heroine.  She gets a little doe eyed around Montgomery, but I expected that so it was not too terrible to endure. I was really interested in spending more time in Juliet’s head.  Her internal dialogue intrigued me immensely.  At first I thought that my immersion into the book was a result of exceptionally lovely writing.  But as I look back, the writing is very solid and descriptive but nothing exceptional.  The source of my fascination was Juliet.  I couldn’t get enough of her.

The plot was very tightly put together and proceeded at a decent pace.  Not once did I feel like things were moving too fast or that things were moving along at a snail’s pace.  It was the perfect pace for the plot.  It spent just enough time on certain portions of the plot that you started to feel uncomfortable.  You wanted the author to move on, but it didn’t until that discomfort achieved its purpose.  I really enjoyed that.  I like a book that uses the pacing and plot to evoke certain reactions or feelings out of me.  In our current environment of cookie cutter characters put into a cookie cutter plot, this felt different.  I also found that I guessed all of the different plot twists long before they actually happened.  When a twist would come up, I’d sensed it coming and wasn’t surprised by it.  Shockingly, I didn’t find this annoying, I kind of enjoyed it.

The only reason that I deducted a star was the love triangle.  In general, I am sick and tired of love triangles.  They are horribly cliche at this point and not interesting at all.  But the love triangle itself was not the reason I disliked it.  I actually liked the fact that the two men were so vastly different from each other.  I could understand Juliet’s attraction to both and why she would not be sure who was the best man for her.  My problem was that I couldn’t even tell it was supposed to be a love triangle until I specifically told.  I saw no attraction or interest from any of them and then it was kind of like, “Oh she kissed him, I guess she must like him.”  and then “Oh, she kissed him too, love triangle here we come.”  I should have been able to guess it.

And now we have come to the ending of this wonderful tale.  Oh, and what an ending it was.  This is the one twist that I didn’t see coming a mile away.  I was convinced that there had to be more pages that I was missing somehow.  It couldn’t possibly end like….THAT!  Where were the rest of the pages?  Maybe I got a flawed book and they left out a chapter or two at the end.  I still am dumbfounded that it couldn’t possibly end that way.  I need that second book right now to find out what happens.