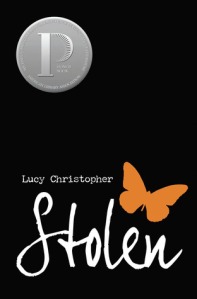 Published May 4th, 2009 by Chicken House

Cover photo and synopsis from the Goodreads book page

A girl: Gemma, 16, at the airport, on her way to a family vacation.

She steps away. For just a second. He pays for her drink. And drugs it. They talk. Their hands touch. And before Gemma knows what’s happening, Ty takes her. Steals her away. To sand and heat. To emptiness and isolation. To nowhere. And expects her to love him.

Written as a letter from a victim to her captor, STOLEN is Gemma’s desperate story of survival; of how she has to come to terms with her living nightmare–or die trying to fight it.

This book was one that came to me with very high expectations.  I heard so many rave reviews about it from people that I trust and whose opinion I highly respect.  I was skeptical, surely it couldn’t be this unequivocally great.  I had a hard time finding bad reviews for it at all.  I was hopeful but skeptical after hearing so many wonderful things.  Usually in cases like this, it ends in disappointment.  This time I have to agree with the rave reviews, there is only one word for this book: Wow!

This book starts out simply enough.  Gemma is waiting out a layover in a Bangkok airport with her parents and decides to step away to get a coffee.  She meets a charming and handsome young man who offers to buy her coffee when she doesn’t have the right currency.  She allows him to do so and diverts her attention long enough for him to do the unthinkable, drug the drink and whisk her away before she is aware that anything is wrong.  The next thing Gemma knows, she is being held captive in the middle of a desert in Australia with someone who believes that he saved her from her life.

I spent much of my time during this book disturbed.  No one could possibly deny that something is very wrong with Ty.  He stalked and kidnapped a 16 year old girl and convinced himself that she would thank him for it and they would live happily ever after.  Deluded to say the least.  But I was also surprised that Ty was…well, a complete gentlemen for a kidnapper.  He never took advantage of Gemma or invaded her privacy, which shocked me.  It was my first hint that Ty was going to be a much more complex character than I had first imagined.  Before long I found myself with tears in my eyes as we heard more about him and from him.  Pity is not a common feeling for one to have for someone who kidnaps a teenage girl.  I was stunned by these feelings but still there would be moments where I felt uncomfortable at the same time.  I can’t say anything more or else I’ll spoil something, and I wouldn’t spoil this book for the world.

The method used to write this book is one that I have never seen before but I think it contributed to the overall quality and emotionality of the book.  It is written as a letter from Gemma to her kidnapper, Ty.  We read about her feelings and experiences and experience them right along with her.  I think this helps us to see her and Ty from a variety of perspectives that weren’t expected.  And the ending.  Oh my God, the ending.  I won’t say much but let’s just say that for about the last 40 pages or so I was sobbing very loudly, embarrassingly, and in public.  I just wanted to crawl in my bed, pull my knees to my chest, and sob until I had no more tears left.  I can’t remember the last time a book elicited such fierce emotions in me.

Following Gemma on this journey was a beautiful thing that will stay with me for a long time.  Even writing this review, as vague on details as it is, made me feel teary eyed again almost a week after I finished the book.  It was such a rollercoaster of emotions that I can’t even begin to describe it in a way that does justice to the story.  I think this book gave me Stockholm syndrome.  Everyone needs to read this book, it is just that good.