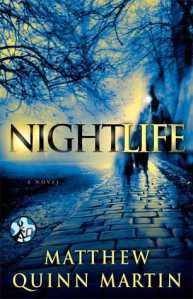 Pre-Order this book at: Amazon / B&N / Books a Million

For centuries an ancient evil has slept beneath the streets of New Harbor. This Halloween, it wakes up.
An action-packed debut horror novel from talented new writer Matthew Quinn Martin, Nightlife pits a feisty bartender and a mysterious loner against bloodthirsty terrors as alluring as they are deadly.

Nightclub bartender and serial heartbreaker Beth Becker might be a cynic. But when her best friend goes missing Halloween night, Beth knows it’s up to her to find out what happened.

Her quest will take her on an odyssey through the crumbling city of New Harbor, Connecticut. Along the way she meets a homeless prophet warning of something he calls the “Night Angel”-a bloodthirsty creature that feeds on the forgotten. And she will form an unlikely bond with a hunted stranger who knows all too well what stalks the streets at night.

Disclaimer: I received a free copy of this book in exchange for an honest review. Thank you to the publisher and author!

This book was both exactly what I expected and not at all what I expected, which is a rather strange sensation I’m sure you can imagine. I am always looking for a good vampire book but I want that vampire book to be something unique. That is why I am still giving this particular niche a chance, I want something different and new! In a sense, this book provided that. But also a lot of cliches.

Characters – Jack Jackson was a complete cliche if I ever saw one. The solitary man who has dedicated his entire life to hunting down the thing that caused him to lose the love of his life, working alone and very antisocial in his quest. But after awhile I didn’t really even mind the clicheness of it because I thought Jack was kind of funny. He made me laugh a few times and I really liked his character. Beth was a pretty good character overall but again, pretty cliche. The stubborn, tough, rough around the edges girl who tends to push everyone away from her but ends up being the unlikely sidekick of the previously mentioned antisocial man on a mission. And yet again, I found that I didn’t really mind the cliche. Beth was interesting and fun, and pretty kickass in her own right. Now she did have a certain amount of the required horror book idiocy about her but it was minor and short lived. None of the other characters really made much impact on me since they seemed so incredibly expendable. When they were around then they were decent enough but then they just are gone and I hardly noticed they were gone.

The plot was fairly interesting in that a bunch of vampires (or whatever they are) have camped out in this little town and are feeding on the homeless population…at least until that can’t sustain them anymore and they go after more risky targets. Jack comes roaring into town, runs into Beth, and together they go to fight and demolish the evil creatures. This was all great. Add it in a shadowy organization that seems intent on…well I’m not sure exactly because they are hardly mentioned at all. What made the plot all the more enticing for me was the origins and true nature of these vampires. I can honestly say I’ve never read anything like it before. It was very unique and I loved it. I also loved that for once in a book like this the characters seem to be aware that other vampire books, movies, etc exist and have seen them. That doesn’t happen often and frankly it baffles me as to why.

By the last page I was really enjoying this book. I wish that we had heard more about “The Division” (previously mentioned shadowy organization) because it seems like that was going somewhere to just get left hanging. The ending was satisfying and not entirely a happily every after but pretty close. And it had enough of a set up for another book that I wouldn’t mind reading the sequel, but if I never read the sequel then the ending was a satisfying one for a stand alone book. This book gets one and a half thumbs up from me, add in more of The Division and it could be a full five stars next time.