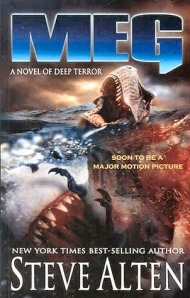 On a top-secret dive into the Pacific Ocean’s deepest canyon, Jonas Taylor found himself face-to-face with the largest and most ferocious predator in the history of the animal kingdom. The sole survivor of the mission, Taylor is haunted by what he’s sure he saw but still can’t prove exists – Carcharodon megalodon, the massive mother of the great white shark. The average prehistoric Meg weighs in at twenty tons and could tear apart a Tyrannosaurus rex in seconds. Taylor spends years theorizing, lecturing, and writing about the possibility that Meg still feeds at the deepest levels of the sea. But it takes an old friend in need to get him to return to the water, and a hotshot female submarine pilot to dare him back into a high-tech miniature sub. Diving deeper than he ever has before, Taylor will face terror like he’s never imagined. MEG is about to surface. When she does, nothing and no one is going to be safe, and Jonas must face his greatest fear once again.

God how I loved this book, I loved it like a fat kid loves ice cream. We have all seen a horror movie that we thought “Oh man, this is just so awful! I love it!” That’s what this book was for me, a made for tv horror movie. But that’s also what made me hesitate to give it four stars. Based on the technical merits of the writing it would probably be a three, based on the story alone maybe a two, but based on how much I absolutely adored it a five would be appropriate. So in the end a 3.5 to 4 seems most fair.

Let’s get a few things straight about this book right up front. The writing is not very inventive or clever. I counted at least 3 times that the word “entrails” was used in every single scene where the shark eats something or someone. It was a bit repetitive and not very thrilling. The plot is also highly outlandish. You might just have to turn off your disbelief switch because I don’t think just suspending it will do the trick.

Though the plot was out there, I also thought it was awesome for that exact reason. More than once I just sat there with the book in my lap laughing so hard that I couldn’t see straight as the book slowly slid its way to the floor unnoticed. I couldn’t put it down because I wanted to see what outrageous thing would happen next. It was fabulous! And the ending…oh my God the ending! Give me a minute, the giggles came back. *deep breath* Okay, I’m good now. The ending was quite possibly the silliest and most amazing thing I have ever read. I cannot even fathom how such an ending came into being. I refuse to say anything else about it because it would ruin the amazingness.

Now let’s ponder for a moment on Mr. Alten’s  theory of how the Megalodon survived the mass extinction of the dinosaurs. The book proposes that the Meg’s prey were driven to the depths of the ocean by the Ice Age and given that they are warm blooded the Meg followed and then stayed there because that’s were the prey was. And by the time they had any need or desire to return to the surface they were trapped by the colder water temperatures and so have stayed in the depths for millions of years. It’s an interesting theory but it ignores several key facts about the closest living relative of the Megalodon, the Great White shark. The White is also warm blooded, and it prefers colder waters. The White is most concentrated in areas such as northern California, off the coast of Massachusetts, the southern tip of Africa. Yes they can and do inhabit warmer waters as well, but the colder water is seemingly preferred. Since the Megalodon is considered a cousin to the White shark, why would that species be much different? There is no logical reason that the Meg would have been “trapped” by the cold layer of water between the depths and the surface. It made for an interesting theory for a book, but doesn’t make much logical sense. *blush* I’m sorry, is my nerd showing?

ENTRAILS!  Now that you’re all distracted let’s move on to characters. They were all typical of this kind of horror book, nothing new or earthshattering. I did think the love interest seemed really forced. I mean, it wasn’t necessary so why not just leave it out? Instead I was caught feeling…wait a second they were wishing death on each other not two chapters ago and now they’re planning a romantic trip for when they survive this? That was kind of weird.

This book had a nice set up for a sequel, which I do intend on reading. I recommend this book if you want to read a book that is as silly as it is tropey, but still completely awesome. I know I loved it.

What a week!  It has seemed to be a flurry of writing, and rating on Helium.  I wrote 2 articles for their Marketplace.  This is where publishers make requests for certain pieces and allow submissions from the site’s writers.  Because the publishers haven’t made a decision on which articles to publish, I cannot provide links at this time.  If mine are chosen and published, I will do so.  And if they are not, they’ll be transferred to Helium and I can link you then as well.  I am also planning a few more articles for the Marketplace this week as well.  They are supposed to be a guide to the most interesting and haunted locations in San Diego, California and Charleston, South Carolina.  It should be interesting and I am working on my research for those now.

I finally managed to complete all the requirements for the Reward-a-Thon and have been writing up a storm for that.  I did 3 articles just under those categories today, and plan on doing more tomorrow.  I have a little over a month to get as many of those titles done as I can.  It will be a long month, but hopefully it will be rewarding in the end.  They promise rewards, so I will work like hell to get them.  I cannot wait to keep writing for the reward-a-thon, so many of the titles are right up my alley.  They have about 8 titles on sharks, which as many of you know I am a complete shark fanatic.  I can easily name a hundred topics that I can write on, if only I can find the time.

Also, if any of your know of somewhere that is looking for a part-time proofreader or copywriter, please let me know.  I could always use more opportunity to ply my trade, and this would be a great opportunity.  And a little extra spending cash can’t possibly hurt either.  The two stipulations I have for this are that i must be able to work from home, and it cannot take up more than about 20 hours a week.  Other than that, send me the info, I am always interested in new opportunities.  So, now for the shameless self-promotion that I seem to be getting so good at…my newest articles:

And again, I will get you a link to those other two pieces as soon as I can.  I think you would like them, the topics are:  How dirty talking improved your relationship and the etiquette of a one night stand.  The first I have personal experience with, the second not so much.  But regardless, both articles were very fun and I am hoping that they get picked for publication.  Keep your fingers crossed for me, I will know by Friday.  ~Stef