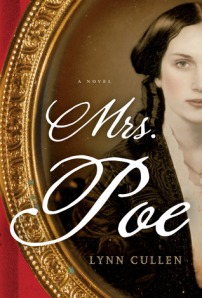 A vivid and compelling novel about a woman who becomes entangled in an affair with Edgar Allan Poe—at the same time she becomes the unwilling confidante of his much-younger wife.

It is 1845, and Frances Osgood is desperately trying to make a living as a writer in New York; not an easy task for a woman—especially one with two children and a philandering portrait painter as her husband. As Frances tries to sell her work, she finds that editors are only interested in writing similar to that of the new renegade literary sensation Edgar Allan Poe, whose poem, “The Raven” has struck a public nerve.

She meets the handsome and mysterious Poe at a literary party, and the two have an immediate connection. Poe wants Frances to meet with his wife since she claims to be an admirer of her poems, and Frances is curious to see the woman whom Edgar married.

As Frances spends more and more time with the intriguing couple, her intense attraction for Edgar brings her into dangerous territory. And Mrs. Poe, who acts like an innocent child, is actually more manipulative and threatening than she appears. As Frances and Edgar’s passionate affair escalates, Frances must decide whether she can walk away before it’s too late…

Set amidst the fascinating world of New York’s literati, this smart and sexy novel offers a unique view into the life of one of history’s most unforgettable literary figures.

This book was an interesting read for me but not entirely what I expected. I expected to find a forbidden love story complicated by a manipulative and conniving wife. What I got was a whole lot of social repartee of the wealthy and elite of early 1900’s New York with a kind of love story and suspicions about the wife that weren’t very well proven with facts. That disappointed me but the story was still ultimately entertaining.

Frances was the main character, despite the title suggesting that Mrs. Poe plays the main role. I felt a lot of sympathy for Frances. Her husband has left her and their children destitute to philander his way across the country, forcing her to try and sell her poetry and live with a family friend. Her first connection to Edgar Poe is round about, she is told that her flowery love poems are not in style since Mr. Poe’s Raven poem but that if she manages to write something more “shivery” to come back and they’ll buy it. After that she begins something of an obsession to be his better until she meets him at a social gathering and….well, I’m not sure exactly when or why she fell in love with him but she does at some point.

Here’s my main problem with the love story in this, it is almost non-existent until the very end of the book. There were a few flirtations here and there and suddenly they’re proclaiming how much they love each other and can’t live without one another. It was strange and I didn’t completely buy into it.

I also didn’t buy into the fact that Mrs. Poe was as manipulative and conniving as Frances would have had me believe. Again, for most of the book NOTHING shady happened at all. As far as I could see Mrs. Poe was only rightly betrayed and jealous that she was so ill and some other woman is making a move on her husband. I have a feeling I’d be a little cold and pissed off too! I just couldn’t ascribe these negative intentions to her no matter how hard I tried.

The ending was interesting and not what I expected but ultimately was something of a let down too. I was hoping that either there would be dire consequences for their actions or their lives would somehow be better for having had their elicit romance. But there were no consequences at all and still their lives sucked about the same as they had before. I tried really hard to love this book because I liked the main character and it was well written and put together. But by the end I was apathetic about it, which disappointed me.