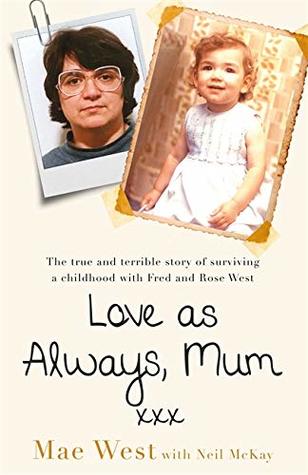 Buy this book at: Amazon | B&N

Synopsis: The true story of an abused childhood, of shocking brutality and life as the daughter of notorious serial killer, and master manipulator, Rose West.

You’re 21-years-old. Police arrive on the doorstep of your house, 25 Cromwell Street, with a warrant to search the garden for the remains of your older sister you didn’t know was dead. Bones are found and they are from more than one body. And so the nightmare begins. You are the daughter of Fred and Rose West.

‘Mae, I mean this … I’m not a good person and I let all you children down …’ Rose West, HM PRISON DURHAM

It has taken over 20 years for Mae West to find the perspective and strength to tell her remarkable story: one of an abusive, violent childhood, of her serial killer parents and how she has rebuilt her life in the shadow of their terrible crimes.

Through her own memories, research and the letters her mother wrote to her from prison, Mae shares her emotionally powerful account of her life as a West. From a toddler locked in the deathly basement to a teen fighting off the sexual advances of her father, Mae’s story is one of survival. It also answers the questions: how do you come to terms with knowing your childhood bedroom was a graveyard? How do you accept the fact your parents sexually tortured, murdered and dismembered young women? How do you become a mother yourself when you’re haunted by the knowledge that your own mother was a monster? Why were you spared and how do you escape the nightmare?

Review: I have my mother-in-law to blame for my fascination with Fred and Rose West. Years back when I was dating my husband she heard that I am a fan of reading and a big fan of true crime. So she passed along a book about Fred West that she had just finished. Since then I’ve read several more. And on her last visit to us, as the wonderful enabler that she is, she brought me this. I was not quite sure what to expect since I know the children’s reactions to the discovery of the crimes and subsequent trial/imprisonment is varied. Some were supportive of their parents and others were vehemently against them.

I was not expecting to be as profoundly moved by this book as I was. I found myself empathizing and identifying with Mae West in a way that I didn’t foresee. While her parents might have been more than your typical brand of evil, the mark of an abusive childhood is unchanged. It was quite interesting to me to hear about the view of the crimes and their parents from one of the children. And I identified with her when she said that people didn’t understand how she could love her parents even when they abused her horrifically. That is the cycle of abuse. And my heart broke at this young woman who couldn’t find someone to understand. As a child in abuse, you can’t escape. You can’t just decide to not love your parents. You can understand that what they are doing isn’t right on one hand and also be desperately fearful that they’ll abandon you on the other. It’s incomprehensible to people who haven’t experienced years of emotional manipulation to accompany abuse.

What really struck me the most about this book was the growth that I saw in Mae over the course of it. She started out firmly convinced that while her father was a monsterand her mother was innocent. A terrible mother, but surely not an accessory to her husband’s crimes. I understood her stance. She couldn’t deny that her father was involved, the bodies were under the concrete that he laid, but she couldn’t lose both her parents too. So she decided that her mother was innocent. And my heart broke for her. I found myself having a mental conversation with her on more than one occasion in this book. Desperately trying to tell this confused young woman that there is light at the end of this long dark tunnel, she just needs to break away from the darkness of her mother.

Slowly, she did just that. My heart rejoiced for her and the feeling of the narrative changed to accompany her new discoveries too. What started as a depressing and heavy book was slowly transformed into a survival story that ends with a woman who has made a happy, thriving life for herself. Even though the entire deck was stacked against her.

This was a fantastic perspective on this case that I was very happy to read.