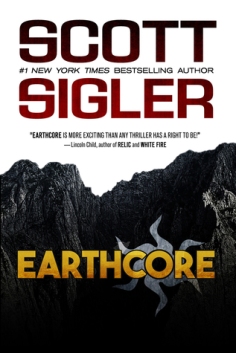 Published: May 20, 2017 by Empty Set Entertainment

Deep below a desolate Utah mountain lies the largest platinum deposit ever discovered. A billion-dollar find, it waits for any company that can drill a world’s record, three-mile-deep mine shaft. EarthCore is the company with the technology, the resources and the guts to go after the mother lode. Young executive Connell Kirkland is the company’s driving force, pushing himself and those around him to uncover the massive treasure. But at three miles below the surface, where the rocks are so hot they burn bare skin, something has been waiting for centuries. Waiting …and guarding. Kirkland and EarthCore are about to find out first-hand why this treasure has never been unearthed.

Just a small disclaimer, I LOVE Scott Sigler. Like really love Scott Sigler. I’ve read everything he’s ever produced and enjoyed almost all of it. When Earthcore was first released all the way back in 2005ish I was skeptical, it was okay but I didn’t think that it was his best work. Now, all these years later, he rewrote the entire thing and re-released it. And WOW! It is so fantastic. The writing structure is a lot cleaner and the characters are a lot more fleshed out. In the first reading I didn’t really care about many of the characters because they didn’t strike me as real people but they did this time.

Connell Kirkland is a tragic figure, I found myself rooting for him, cursing him, and crying for him throughout the course of the book. A few of the side characters didn’t do much for me, like Veronica. I thought she was a whiny bitch and needed to go away. I wish we had seen more of Sonny but the story largely demanded his absence so I understand it.

The premise of this is an interesting one. A mining company stumbles on a lot more than they bargained for and aren’t sure what it is until it’s too late. Could it be claimjumpers trying to steal their find? Other miners that beat them to it? A lost tribe that has lived underground for a few thousand years? Or is it sabotage? Unfortunately for almost all the characters, it’s much much too late before they figure it out.

While I was listening to the audiobook, I found that the narrator distracted me a little for the first few chapters and I was skeptical that I would continue. But I stuck through it and was rewarded, he got a lot better and it was much more enjoyable.

I will stop before I am tempted to spoil the whole thing, all I will say is that it’s time to prepare. Prepare for Mount Fitzroy.

One thought on “Book Review: Earthcore by Scott Sigler”