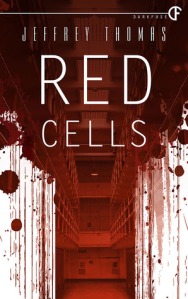 Buy this story at: Amazon

Private detective and mutant shapeshifter Jeremy Stake (hero of the novels Deadstock and Blue War) has fallen on hard times in the far-future city of Punktown. When he is offered an opportunity to masquerade as another man to do his prison sentence for him, Stake agrees, but this is a new type of penitentiary—existing in its own pocket universe.

In this isolated prison, a series of gruesome murders have occurred, and the inmates soon force Stake to investigate. Can Stake catch a killer that might not even be human, without becoming just another victim?

Disclaimer: I received a free copy of this story from the publisher in exchange for an honest review. Thank you DarkFuse!

A story that is under 100 pages has no excuse to be boring, this one was boring. But it was also not badly written. In fact, I think if the story was given more time and space to develop then it could have been really good. As a short story, however, it felt rushed and hectic.

The character of Stake was an interesting one. He is a mutant who can assume the physical form of another human. He is normally a private investigator but things are tough and he agrees to do a stint in prison for someone else. Naturally chaos follows and gives him a mystery to solve. I liked him as a character, though he was a tiny bit stereotypical for a private investigator type. However, because the story was so short I felt like I didn’t really learn much about him. Since he is the main character in two novels this is not to be expected, but it would have been a nice addition.

The story was also a good one. A prison that is located in pocket universe and something is killing the prisoners. That is very interesting. But unfortunately, the story was told to me almost exclusively instead of showing me. That was annoying. Don’t tell me! For heaven’s sake do a little bit of creative writing and show me.

It was also pretty predictable. As soon as they described the killer to me, I thought….well of course it’s that X thing/person that they told us about. And it was. This could have been done a lot better. I have no doubt that the author can write better than this, I can see the talent there. But this story did not showcase that talent at all.