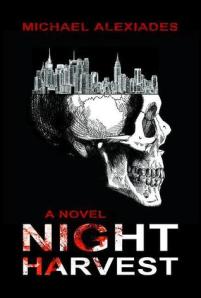 A riveting debut thriller from one of New York’s most eminent surgeons, Night Harvest follows the bizarre disappearance of patients from a Manhattan hospital into the murky underground of the city.

Fourth-year medical student Demetri Makropolis has been assigned to cover orthopedics at Eastside Medical Center, one of New York City’s finest hospitals. Just as his surgery team begins to operate on New York’s leading drama critic, F. J. Pervis III, the patient suddenly goes into cardiac arrest. The team fails to resuscitate him, so the corpse is moved to the hospital’s morgue. But before the autopsy is even performed, the body vanishes from the morgue and mysteriously reappears a day later—with the brain surgically removed. Even more disturbing is the medical examiner’s discovery: Pervis was still alive when the ghostly craniotomy was performed.

With their reputation at stake, the hospital assigns NYPD’s Detective Patrick McManus to the case; meanwhile, Demetri learns of an eerily similar century-old unsolved mystery that leads him to an enigmatic figure lurking in the bowels of the medical center. With Pervis as his experiment, the perpetrator initiates a chain reaction of chaos and murder in Manhattan.

A gripping tale filled with ambition, romance, jealousies, and black humor, Night Harvest is a thrilling ride that culminates in the long-abandoned elaborate network of subterranean rooms and corridors that still lie beneath present-day Manhattan.

Disclaimer: I received a free copy of this book from the publisher in exchange for an honest review. Thank you Turner! Past this point this review contains spoilers.

This book was kind of boring. The idea was that this medical student gets involved in the plot of a serial killer when a local celebrity dies on the operating table only to have his body go missing. Then later they find out he wasn’t dead at all and was killed later. Other people go missing, medical student plays detective and we all know how it proceeds from there. I wouldn’t really call this one predictable, because it was just so random. But, I present you the pros and cons of this book.

Writing – The writing is not bad. It is adequate for a story of this type, although I felt like it tended to ramble a little too much without really going anywhere. But largely I have no complaints about the writing, it accomplished what it needed to accomplish.

Characters – Again, no complaints but nothing truly spectacular. The characters were decent and not too cookie cutter like. I did really like Demetri and McManus, I would have preferred that the POV was strictly kept between the two of them. The other characters I didn’t really care much about either good or bad. They were just set pieces for the greater story.

The Bad Guy – This was just weird. He kills because he has found the secret to immortality, but then he alternately kills other people and rapes them just because. He seemingly has no preference for male or female victims to rape, not even seems to care if they are alive or not at the time. This is so out of synch with everything that makes a sexual predator what they are, they have very specific preferences. It just, I don’t know. Oh yeah and did I mention that he is supposedly like 100 years old? Weird.

POV Jumping – We spent time with at least 6-7 different characters and we seemed to jump between them every 2-3 pages. It was so confusing. I still don’t think I know who half of the characters are and how they related to the story. And it seemed like the author wanted to give every character a back story, so it is just a long line of one page of plot and one page of backstory then on to a new character. I found that I learned absolutely nothing about any of the characters as a result.

Plot – Meandering and aimless. I wasn’t sure what the actual point was except to just set us up for a sequel at the very end. Nothing really was accomplished. And I found that I cared less than I should.

Overall it was not a bad book but it was not very well executed. It needed a lot more work before being put on the market to really tighten up the story and characters. So I would rate it as slightly less than average.