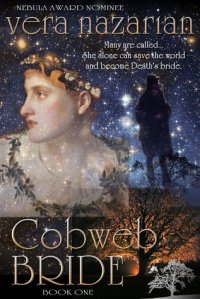 Many are called…
She alone can save the world and become Death’s bride.

Cobweb Bride is a history-flavored fantasy novel with romantic elements of the Persephone myth, about Death’s ultimatum to the world.

What if you killed someone and then fell in love with them?

In an alternate Renaissance world, somewhere in an imaginary “pocket” of Europe called the Kingdom of Lethe, Death comes, in the form of a grim Spaniard, to claim his Bride. Until she is found, in a single time-stopping moment all dying stops. There is no relief for the mortally wounded and the terminally ill….

Covered in white cobwebs of a thousand snow spiders she lies in the darkness… Her skin is cold as snow… Her eyes frozen… Her gaze, fiercely alive…

While kings and emperors send expeditions to search for a suitable Bride for Death, armies of the undead wage an endless war… A black knight roams the forest at the command of his undead father … Spies and political treacheries abound at the imperial Silver Court…. Murdered lovers find themselves locked in the realm of the living…

And one small village girl, Percy—an unwanted, ungainly middle daughter—is faced with the responsibility of granting her dying grandmother the desperate release she needs.

As a result, Percy joins the crowds of other young women of the land in a desperate quest to Death’s own mysterious holding in the deepest forests of the North…

And everyone is trying to stop her.

I received a free copy of this book by the publisher in order for an honest review.

I have literally no idea what to make of this book. It just….I don’t know. The idea behind it was just so interesting and intriguing. I read the synopsis and thought, wow this sounds so good. And it just wasn’t. It had its good points to be sure, which is why I gave it two stars but at the end I was just left shaking my head and wondering what the hell was going on.  Be warned, BEYOND THIS POINT THERE BE SPOILERS!!

The characters in this book were really good. I fell in love with them and wanted to hear more about them.  Well, okay, most of them. Some of the characters seemed completely useless but most of the main ones were good ones. Percy was fun, though I think she was trying too hard to be philosophical and that got old after awhile. Grial was funny and amusing so I liked having her around and frankly I thought she was around for much too short a time. Beltain was alright but he struck me as a complete wuss. He caved in to his father, he caved in to the Princess, he caved in to Percy…this man is an expert flip flopper. And most of the other characters were so vacant that I hardly noticed or cared that they were there.

I was really pissed off by the only romantic angle in this book. So basically the Princess (Claere) is stabbed to death by a Duke who believes that his family has been hard done by her father. But she can’t die because Death is no longer taking souls. So she talks to him and takes him with her on her journey to Death’s castle and…..falls in love with him. Dear God seriously? This goes so beyond the YA addiction to showing abusive love relationships. This is violent from before they ever even talk!? He killed her for the love of God! I was so angry about this I couldn’t even speak. I predicted that it would happen and it pissed me off when it did.

I was thoroughly confused about many aspects of this book and frankly, I still am puzzled. It makes no logical sense at all. For example, Death shows up and says that he is not taking souls anymore until they find his Cobweb Bride and brings her to his keep. So I tried to think why everyone in the world wouldn’t just say, alright fine we’ll just live forever then. Apparently the author wondered this too so decided to force the world’s hand by making animals unable to be slaughtered or cooked…which makes sense because animals have living souls. But then also says that plants can’t be cooked….um why? Do plants have souls in this book too? That was never addressed. And there are plenty of plants and vegetables that don’t need to be cooked to be eaten so why are we not eating those instead? And even if you couldn’t eat why would the world still not just say screw off we’ll live forever? I don’t understand this at all.

But then it gets even more confusing when they arrive at Death’s keep. Death says that he can’t keep taking souls because every time he takes a soul he gives them a part of himself and then when they die that part comes back to him. But this woman, his Cobweb Bride, was supposed to die and he gave a piece of himself to her and then she didn’t die. Which rendered him incapable of taking souls until she returns that piece of him. So, if he is incapable of taking souls then why did he say that he was CHOOSING not to take souls? Which is it? I still don’t know. But then he manages to give a piece of himself to Percy so that she has some of his powers and can go find his Bride and bring her back…and somehow that means she can take souls. How? If Death isn’t capable of taking souls then how can he give that ability to Percy? Or if Death really was choosing not to take souls then why would he give that ability to Percy and why would he say that it was because he couldn’t?

I am just so confused by this book. I wanted to like it, I did like certain parts of it, and the rest just confused me. I won’t be reading any more of this trilogy, even if I was promised to get some answers.