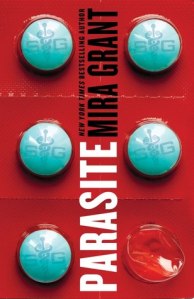 Disclaimer: I received a free copy of this book in exchange for an honest review. Thanks to the author and Orbit!

A decade in the future, humanity thrives in the absence of sickness and disease.

We owe our good health to a humble parasite – a genetically engineered tapeworm developed by the pioneering SymboGen Corporation. When implanted, the tapeworm protects us from illness, boosts our immune system – even secretes designer drugs. It’s been successful beyond the scientists’ wildest dreams. Now, years on, almost every human being has a SymboGen tapeworm living within them.

But these parasites are getting restless. They want their own lives…and will do anything to get them.

I am not sure where this book went wrong for me but I went into it with high expectations. I am a fan of Mira Grant, I find her to be a very good writer and I have enjoyed what I’ve read from her in the past. And I started off enjoying this too, but somewhere along the line it just lost its appeal and I ended up bored.

The idea behind this book is a good one although I have to admit I was skeptical about the idea that science had engineered tapeworms to treat our medical ills. These things can secrete medication, adjust metabolism, mend some injuries, and a whole host of other things. But I have a hard time believing that just in a decade from now 99% of society will be totally cool with intentionally ingesting a parasite. I didn’t really buy that but then I had to remind myself that there are people out there who buy tapeworms off the internet to lose weight so maybe it’s more possible than this wouldn’t be as hard of a sell as I believe.

The main character was interesting but she got a bit old after awhile. I liked Sal ultimately. She was in a horrible accident that left her clinically brain dead and on life support. Her family was about to end life support when she woke up against all medical odds. The company that manufactures these tapeworms suspect that her “implant” played a role in her recovery and so offer to pay all her expenses in exchange for studying how that is possible.  Unfortunately this is when I began to suspect that I knew what was going on, I looked at the synopsis and looked at Sal and thought “I hope I’m wrong about this!”

The story moved a bit slower than I would have liked but the information was interesting so I didn’t get bored. We met some new characters that I liked and I enjoyed the people we met at first. I hated Sal’s family. They were bossy, secretive and pains in the ass. More than once I found myself cringing when they said something to Sal and I thought, how could you SAY that to your daughter! I didn’t like the people at SymboGen because they were just all creepy and narcissistic. The secretive people that are determined to give Sal answers weren’t much better since they were clearly using her for their own means. By the end the only characters I liked were Sal, her boyfriend, and Tansy.

The big reveals were equally great and disappointing. The first big reveal floored me. I didn’t see it coming a mile away and I felt as betrayed as Sal did. But I recovered quickly since technically we didn’t know the character all that terribly well. But the second big reveal was awful. Remember that moment in the very beginning when I thought “I hope I’m wrong”? Yeah, I wasn’t wrong. It shouldn’t be that blatantly obvious.

At the end of the day I enjoyed it but the ending took away from my enjoyment a little bit. I am interested enough in the second book that I will definitely read it but once again I suspect I know what the plot is going to be and I pray, please let me be wrong!