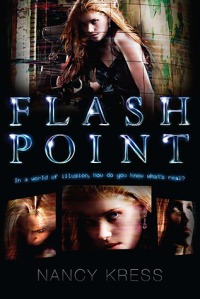 Reality TV meets a chillingly realistic version of America—and the fame game is on!

Amy had dreams of going to college, until the Collapse destroyed the economy and her future. Now she is desperate for any job that will help support her terminally ill grandmother and rebellious younger sister. When she finds herself in the running for a slot on a new reality TV show, she signs on the dotted line, despite her misgivings. And she’s right to have them. TLN’s Who Knows People, Baby—You? has an irresistible premise: correctly predict what the teenage cast will do in a crisis and win millions. But the network has pulled strings to make it work, using everything from 24/7 hidden cameras to life-threatening technology to flat-out rigging. Worse, every time the ratings slip, TLN ups the ante. Soon Amy is fighting for her life—on and off camera.

Short version – This book sucked.  Nothing happens.  Not a damn thing.  Then suddenly the author seems to remember they are writing a book to interest people and something happens.  Then the book is over.  Save your money and buy a book where something, ANYTHING happens.

Long version – I was really looking forward to this book, it’s embarrassing just how much.  I wanted to love it so much that I pre-ordered it months before it was released.  Then I started seeing a lot of bad reviews and had an “uh oh, did I screw this royally?” moment.  The premise interested me because it sounded a tiny bit like The Hunger Games but in a more tame fashion.  Interesting, and I was willing to give it a shot despite my sudden misgivings.

I have seen people speculating that the grammar or spelling errors might be because they got an uncorrected ARC copy…it wasn’t.  There were many times when I did a double take and said to my book “what the hell is that supposed to say…because it definitely doesn’t say whatever it is!”.  I got annoyed that they kept calling Kaylie different names.  One paragraph its Kaylie, the next paragraph (no joke, literally the next paragraph) it was Kayla. It confused the hell out of me.  There were enough characters for me to keep track of, I didn’t need one with two names.

Amy was an idiot.  A irredeemable idiot.  First, she applies for a job without having any idea what the job is.  Who does that?  Idiot Amy does.  Then, she signed a legally binding contract for the mystery job without even bothering to read it…or even skim it!  It was at that moment that I knew Amy and I wouldn’t get along.  But not only was she a complete moron, she was boring too.  I sort of agreed with the emails she got later in the book that said she did nothing and was a waste of air time.  She was a waste of book time too.  And she treated her sister like shit, then I branded her total Grade A bitch status.

The plot was just so dull.  9 out of the 10 scenarios were laughably stupid.  The book jacket says that they kept upping the ante until Amy and the others are fighting for their lives both on screen and off screen.  Wait, hold on.  Where is THAT book?  Because it sure as shit isn’t the book I just read!  The scenarios were all boring and much the same.  I didn’t see any upping the ante at all.  Then suddenly we get to the last scenario and they are breaking the law and trying to kill people.  What the actual fuck?  Boring to illegal in 2.5 pages!  But by then I didn’t fall for the bullcrap because I’d seen the same tactic in the 9 other scenarios so that made it not only implausible but also predictable.

Stupidest love triangle….square….ever.  So not only did the love triangle suck but they tried to make it a love square, which was weird and made even less sense than the love triangle.  Naturally one of the guys was the pretty boy who everyone falls in love with.  The other guy I actually liked.  But only one of them ever seemed to be interested in Amy at all, but Amy was only interested in the other guy until he did something she didn’t like and then she was all over (literally) the guy who had been flirting with her from day one.  Then they tried to throw in another person and it just got weird and stupid and I didn’t believe any of it at all.  Amy was boring, the other girl was a manipulative bitch.  What’s to like?!

And now for some notes for other authors to learn from this train wreck:

1. When you are writing a dystopian novel in which everything has changed drastically from the way we know it, explain how that happened!  And exactly what happened!  Just referring to everything as “pre-Collapse.” isn’t helpful.  I don’t know what the fuck the Collapse was or did!?  Tell me for the love of almighty Goddess!  Just a few paragraphs to explain the backstory would have been sufficient, or a prologue.  Anything!

3. Unless your book is a comedy, if I’m laughing to the point of tears you’ve failed….badly.  Take heed.

4. If you are going to give your heroine some kind of special power, at least tell me what it actually is.  I read an entire book and I have not a clue about what Amy’s phantoms were or what purpose they served.

5. If you are writing in a character who is giving your heroine hints about what’s to come as a warning, please make sure those hints make sense.  Maybe it’s because Amy was an idiot that she didn’t get it earlier, but I didn’t get it either.  Two vague words does not a warning make.  Make it clear or I really won’t give a damn.

6. Please, stop the endless lists of designer brands.  At a certain point I start thinking that they are paying you for product placement.  Then I start to giggle.  Then when I get tired of giggling, I just skim the rest of your shitty tome.

7. If your own characters tell me how much something sucks, don’t write it.  Otherwise I will sit there and nod and go “yep character A, you’re write that’s fucking stupid.”

Don’t buy this book, I beg you.  If you absolutely have to read it then get it from the library or a friend who already wasted their money on it.  It’s not worth it.  It’s not even worth the paper it’s printed on.

One thought on “Flash Point by Nancy Kress”