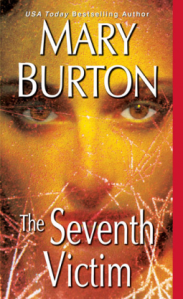 The Seventh Victim by Mary Burton

Synopsis and cover image provided by the publisher.

If At First You Don’t Succeed

It’s been seven years since the Seattle Strangler terrorized the city. His victims were all young, pretty, their lifeless bodies found wrapped in a home-sewn white dress. But there was one who miraculously escaped death, just before the Strangler disappeared…

Lara Church has only hazy memories of her long-ago attack. What she does have is a home in Austin, a job, and a chance at a normal life at last. Then Texas Ranger James Beck arrives on her doorstep with shattering news: The Strangler is back. And this time, he’s in Austin…

He’s always craved her, even as he killed the others. For so long he’s been waiting to unleash the beast within. And this time, he’ll prove he holds her life in his hands—right before he ends it forever…

Let me tell you a little story about this book.  I accidentally requested to get an ARC.  I thought that the author was a different author whom I have read and enjoyed before and I jumped out of my chair in joy at thinking she had a new book.  After I realized that I was mistaken about who the author was, I ended up not caring too much because the story still sounded really fantastic.  Oh, how I was wrong!  Despite having an excellent cover and an astounding synopsis, this book was just a mess.  I bring you, bullet points!

I received an ARC copy of this book from the publisher via NetGalley in exchange for an honest review.  Thank you Kensington books!  This review is based on an uncorrected ARC of this book, certain things may differ from the final copy.