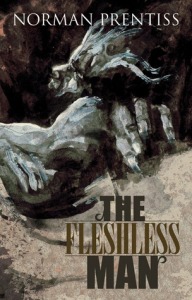 The Fleshless Man by Norman Prentiss

Photo and synopsis from the Goodreads book page

Buy this book at B&N / Amazon

“The Fleshless Man wants to kill me,” his mother said.

Curtis never enjoyed the cool, oppressive atmosphere of his childhood home, and that atmosphere is even worse when he returns as an adult. His mother is dying, and her illness seems to infect everyone around her: Curtis’s brother has developed a nervous habit that might indicate more serious problems; the attending nurse exhibits puzzling, possibly sinister behavior; and Curtis himself suffers from nightmares and uncharacteristic dark thoughts.

It’s as if the house itself wants his mother to die more quickly—and it will achieve that goal however it can.

Even if it must inspire Curtis to imagine harming his own mother.

Even if it must summon the intervention of a strange entity called the Fleshless Man.

I have a feeling this might be a very short review, because it is a very short story.  My ebook edition of this was only 66 pages, so it barely qualifies as a novella but is too long for a short story.  Reading the synopsis I was fascinated by what this book had to offer.  Then I was surprised that it was so short, but still intrigued with the story I started on my way.  And that’s about when the confusion set in.  But, I am getting ahead of myself.

The writing in this novella is not bad, in fact it could be described as very good.  It was descriptive and compelling when it needed to be.  But unfortunately there wasn’t much to describe because the story was so thin.  This author is clearly a good author who deserves all the praise you find on his biography.  Given more time and length I think this story could have been incredible too.  But being so short just made this story confusing and boring in many places.

Let me be really honest here, that line at the beginning of the synopsis, “The Fleshless Man wants to kill me.”  I didn’t even see that part and so when the character Curtis says that his mother said it my first reaction was “Really?  Where? I didn’t see it.”  I still am not aware of when that was exactly because I couldn’t find it.  Much of this story starts as a dream, but I was never fully aware of when we were in a dream and when we were not.  If that was the author’s intention then it was done well, but I didn’t like it.  If it wasn’t the intention then that was a failure.

The monster in this story is glossed over and not really that important to the story which was a disappointment since it bears the monster’s name.  I just wasn’t quite sure what this was about.  If it had been longer and more detailed I probably would have liked it.  But instead I just got to the end and thought, “That’s it?  Really? I have no idea what I was reading for the last 66 pages.”  And even after some reflection, I still find that those feelings are very accurate.
This book was provided by the publisher via NetGalley in exchange for an honest and thoughtful review.  No money or promises were exchanged.