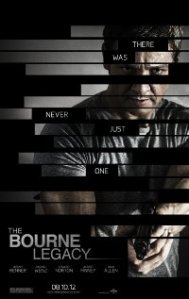 I am not sure whether this post will turn out to be a rant or more like a review, so I’m not calling it either.  I’ll let you fine folks decide.  So there’s the skinny:

Yesterday I spent some time with my family, my mom and brother.  We went to lunch and my mom and I went shopping the sales at Macys.  Sales is the only time I even go INTO Macys, let alone buy stuff.  I needed some new jeans and I managed to get a few pairs of $90.00 jeans on sale for $14.00.  That is what I call a deal!  Anyway, we decided that we wanted to go see a movie.  My brother and I tried to convince mom to go see The Possession, but she doesn’t like scary movies the way we do.  I tried to argue that she’d fall asleep by the time the previews were over anyway, so what did it matter what movie it was, she didn’t bite.  So instead we decided to see The Bourne Legacy.  Now, I really have no feelings, either negative or positive, on the franchise itself.  I’ve only ever seen The Bourne Identity, and it was enjoyable enough despite starring Matt “Fat-Face” Damon in it.  I am not a fan of his.  And yes that is my nickname for him, usually I just shorten it to fat face Damon.  Seriously did you see him in Contagion?  Even emaciated and close to dying he had chipmunk cheeks!  Anyway, I digress.  But this movie does not have him in it, and it DOES have Jeremy Renner and Edward Norton.  Ed Norton is on my shortlist of top 5 favorite actors ever, so I was happy to agree to see this movie.

Basically here is what it’s about.  The Jason Bourne fiasco is spreading too much light on the Treadstone project, and by association the other related projects that have spawned from it.  When information about the connection between these programs surfaces in the public, the CIA decides to eliminate the program entirely.  They decide to kill the scientists involved and eliminate the subjects of the experiments.  Their goal is to wipe out all evidence of this project and give the public time to move on and then they’ll start over.  Everything goes according to plan until Aaron Cross gets lucky and isn’t killed along with the other agent he was with.  He figures out what is happening fairly quickly and decides to make a run for it.   There’s only one problem, he is required to take 2 kinds of pills (green and blue) every day or the enhancements made to his physical and mental capabilities will revert back to how they were before the project.  He goes looking for the one remaining scientist involved in the project before they can manage to kill her, to convince her to get him more pills.  And let the adventure begin.

I actually quite liked this movie for most of the film.  It was even good enough to keep my mom’s attention and for the first time in at least a year she didn’t fall asleep during a movie.  I liked everything about this movie…..until the end.  I don’t know about any of you but I prefer my books and movies to have a beginning, a middle, and an end.  There is a right way and a wrong way to do a cliffhanger in either a novel or a movie.  This movie was not the right way.  We spend most of the movie in chases and running around, which was fine.  But then we get to a point where Aaron Cross sends a message that this isn’t over to the government who wants him dead, they escape an assassin and plot their next move…and end credits!  Seriously?!  We were right in the middle of the climax of the story and then it just ends.  They might as well have put a message on the screen, “The end…of part 1, come back next year and give us more of your money when you’ve completely forgotten how badly this one ended.”  It irritated me to no end.  There was no resolution, there was no ending.  We were right in the middle of the action and it just….stopped.  I hate it when books do that, I hate it equally when movies do that.  This movie should have left me curious about what happens in the next movie, but another movie shouldn’t be required for me to get the end of the story.  It left a bad taste in my mouth and I have no desire to see the next movie because they’ll just end it the same way so that they can squeeze as many bucks out of the public as humanly possible by dangling the rest of the story in front of their noses.  What happened to storytelling!?  Did you just forget that stories are supposed to have endings?  Seriously!

We didn’t even get a good sex scene either.  All they ever did was hold hands and tend to each other’s wounds.  Well they were about to get it on when the credits started rolling, but hopefully they waited till they were somewhere a little more private than the deck of a boat where there are children present.  But we didn’t even get a kiss.  That wouldn’t have made the ending good, but it might have eased the pain a little.

5 thoughts on “Bourne Legacy..review or rant, we’ll find out!”