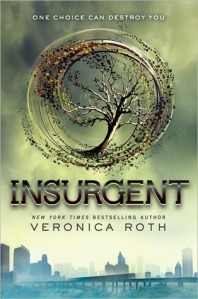 Insurgent by Veronica Roth (book 2 of the Divergent Trilogy)

Published May 1st, 2012 by Harper Collins

Picture and Synopsis from Goodreads

Purchase this book at: B&N and Amazon

One choice can transform you—or it can destroy you. But every choice has consequences, and as unrest surges in the factions all around her, Tris Prior must continue trying to save those she loves—and herself—while grappling with haunting questions of grief and forgiveness, identity and loyalty, politics and love.

Tris’s initiation day should have been marked by celebration and victory with her chosen faction; instead, the day ended with unspeakable horrors. War now looms as conflict between the factions and their ideologies grows. And in times of war, sides must be chosen, secrets will emerge, and choices will become even more irrevocable—and even more powerful. Transformed by her own decisions but also by haunting grief and guilt, radical new discoveries, and shifting relationships, Tris must fully embrace her Divergence, even if she does not know what she may lose by doing so.

Don’t let a 3 star rating fool you, I really liked this book!  There was nothing essentially wrong with it, but it certainly was not a home run like Divergent was.  I enjoyed the plot overall but also didn’t feel that a whole lot happened.  We begin the book moments after the first book began, so we should be filled with action from the very first chapter.  And it wasn’t, not really.  The surviving group is headed for Amity, hoping that the faction will provide them shelter while they decide what to do next.  I liked this, it was a logical step in the plot.  Let’s go through this point by point….

Too much teenage angst and drama!  The first book was so enthralling from the very start, Tris is a strong female lead character, and there was minimal teenage angst.  Since it is YA, the angst is to be expected to an extent so I was so pleased when there was not much of it the first time around.  This time we couldn’t seem to get away from it.  Tris and Tobias (Four) are bickering at every turn it seemed and spent most of the book not really talking to each other.  NO!  This is not where we left that relationship!  It was just starting to bloom and form and it was awesome, a love forged in fire and war!  But they are at each other’s throats ALL THE TIME and it bugged me.  So as a consequence we spend a lot of time in Tris’ head as she goes over the drama and how to avoid it or fix it.

The plot just moved too slow and waited too long to get good.  Most of the time was spent plotting what to do instead of actually doing it.  However, once things actually got moving it was fantastic!  I loved the different side to Amity that we haven’t seen before and we gained a lot more insight into their faction and other factions as a result.  Then we have the teaser from Marcus, of information that Jeanine wants to keep secret when everyone else should know.  That was interesting since we don’t know what it is, just that it seems really important.  During this time we also get more views into Tobias’ relationships with his parents.  This gives us a view of his character that was very needed and I lapped it up.   Overall I would say that I enjoyed the progression of all the plot points and characters in the book, except Tris.  I dunno what happened to her, she went from smart, witty, inventive, and strong to being stupidly self-sacrificing for no reason other than guilt.  I can understand where it came from, but it started to get annoying with her constantly running off to get herself killed and forcing the others to focus on saving her from herself.

I loved the glimpses and progression we saw of Jeanine.  She was such a great villain.  You wanted to hate her so much and with such good reason, that other insidious (though less blatantly so) characters flew beneath your notice.  I pride myself on seeing things coming, Jeanine clouded my view of the plot and I was blindsided by several things.  Jeanine holding Tris captive to experiment on her was really interesting and I couldn’t put the book down during that part at all.  The mission to raid Erudite headquarters and get the information was also fantastic.

The ending of this book left me slack-jawed and thinking “What the hell just happened?”.  I also liked the fact that it wasn’t really even a cliffhanger.  If this were the end of the series, I would be content with how it ended.  But knowing that there is another book coming makes me anxious to find out what’s next RIGHT NOW.  I look forward to reading the last book, hopefully with less angsty moments.