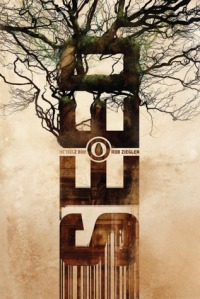 It’s the dawn of the 22nd century, and the world has fallen apart. Decades of war and resource depletion have toppled governments. The ecosystem has collapsed. A new dust bowl sweeps the American West. The United States has become a nation of migrants—starving masses of nomads roaming across wastelands and encamped outside government seed distribution warehouses.

In this new world, there is a new power: Satori. More than just a corporation, Satori is an intelligent, living city risen from the ruins of the heartland. She manufactures climate-resistant seed to feed humanity, and bio-engineers her own perfected castes of post-humans Designers, Advocates and Laborers. What remains of the United States government now exists solely to distribute Satori product; a defeated American military doles out bar-coded, single-use seed to the nation’s hungry citizens.

Secret Service Agent Sienna Doss has watched her world collapse. Once an Army Ranger fighting wars across the globe, she now spends her days protecting glorified warlords and gangsters. As her country slides further into chaos, Doss feels her own life slipping into ruin.

When a Satori Designer goes rogue, Doss is tasked with hunting down the scientist-savant—a chance to break Satori’s stranglehold on seed production and undo its dominance. In a race against Satori’s genetically honed assassins, Doss’s best chance at success lies in an unlikely alliance with Brood—orphan, scavenger and small-time thief—scraping by on the fringes of the wasteland, whose young brother may possess the key to unlocking Satori’s power.

As events spin out of control, Sienna Doss and Brood find themselves at the heart of Satori, where an explosive finale promises to reshape the future of the world.

I don’t know quite how to put this best so I’ll just come right out and say it, full disclosure, I could not stand this book.  I prayed that it would be over practically from the beginning.  Okay, maybe not the beginning but definitely page fifty for sure.  I have had good success with Night Shade publications in the past and the cover and synopsis of this drew me in and made me want to see what it was all about.  Being a huge fan of sci-fi and dystopian fiction I thought this would be a slam dunk.  Oh, how I was wrong.

Let us start with the good things.  Mr. Ziegler is very imaginative.  I found myself struck several times at the level of creativity shown in the characters and some of the action scenes.  I also really loved Sienna Doss.  She is a kick ass woman and I loved her in every scene even when she seemed to be doing nothing more important than picking her nose. I also really enjoyed her cohorts Jake and Casanova.  They provided some real laughs and probably were some of the most memorable moments in the book.

My first issue with this book was the complexity of the plot.  I don’t mind complex plots as long as everything makes sense and I can keep track of it all.  Now, I don’t consider myself a stupid person (though I know one author for certain who may disagree, but it’s not Mr. Ziegler), and I can track a lot of information that might leave other readers scratching their head.  But this book flipped between different stories and different characters so fast I had a hard time keeping up.  In addition, none of the narrations really seemed to be going anywhere so I had zero comprehension of what the actual plot was.  I probably read the synopsis of this book twenty times over the course of this book because I honestly couldn’t remember what the point was supposed to be.  I’d read the synopsis and think, “Oh yeah, that’s who that Doss woman is and why she’s important.  Well when is she going to do that?!”  I wanted to like this plot and the characters but I just couldn’t.

Issue number two is the fact that half the book seems to be written in Spanish.  Now, I do not speak Spanish but this book was supposed to be in English.  Half the characters seem fluent in Spanish and use that to my disadvantage.  I wouldn’t have cared if the Spanish being used is the typical Spanish phrases and words that most people are familiar with and so they are easily comprehended.  I couldn’t follow what several of the characters were even talking about without getting a Spanish-English dictionary or becoming fluent in Spanish before reading.  Neither of those things was I willing to do just for this book.  So instead I spent my time wondering just what the hell these people were talking about and just tuning it out and deciding it wasn’t important enough to find out.

Issue number three was the world building.  I had no idea how the world got this way, just that it did.  I had no idea how Satori came into existence or why, just that it did.  It was never revealed what exactly the Fathers were planning or trying to do or anything regarding their motivations.  Basically you are just thrown into this world without being given any details about it at all.  I didn’t need to know everything down to a hour by hour breakdown, but at least give me the broad strokes!

Next was the big problem I had with the descriptions of Satori.  I don’t consider myself squeamish by any means, but these parts just grossed me out. Satori is a semi-sentient city that produces the seed that the rest of the world lives on and its Designers care for her and the Fathers who created her.  So basically we have a whole city of flesh and muscle and bone.  If someone wanted to sit, a lump of flesh appeared.  If they needed a door then an orifice appeared for you to walk through.  Sex was presented between these Designers in quite possibly the most unsexy way possible.  “The Designer decided he wanted to connect with her and stuck it in her.”  That isn’t an exact quote but it’s pretty close!  Not sexy or enticing at all, just more discomfort on top of the city’s orifices.

My last problem with this book was the lack of emotion I had for any of it.  I couldn’t feel empathy for the characters because I couldn’t understand them most of the time.  I couldn’t have feelings about the plot because I kept forgetting what it was.  The only real emotion I had toward the book was, “When will this be over!”.  It is a worthy attempt at a first novel, but falls woefully short of being audience ready.